Trafford Council is to hold an extraordinary meeting to discuss plans to amalgamate Stamford Park Infant and Junior schools in Hale and build a new multi-million pound primary school building on the existing site.

The council’s Executive Committee is to meet on Monday August 19th at 6.30pm.

The adjoining Infant and Junior schools, which have been on Cedar Road in Hale since 1905, are home to over 500 pupils aged between three and 11.

The council is proposing to build a new three-form entry primary school – accommodating an extra 20 pupils per year group – on the existing school playing fields and then demolish the existing buildings to make way for a new playing field and car parking.

But while the Infant school is in favour of the plan, the Junior school is against it, and is instead wishing to convert to academy status.

Trafford said that it had already had “informal discussions” with the governing bodies of both schools and had provided information about “timescales, school organisation, governance, finance and the design and building of a new school”.

An agenda published by the council ahead of next week’s meeting also revealed that in its recent informal public consultation, 82% of parents who submitted a verified response were in favour of the plans to build a new school, out of a total of 182 parents who responded.

In terms of other categories of verified respondents, 29% of local residents, 56% of school staff and 31% of other stakeholders were in favour.

The council said it had also received 614 “minimal” responses apparently showing 94% of parents in disagreement with the plans, but said it was “highly likely that a person or persons have tried to influence the outcome of the informal survey by submitting duplicate blank surveys”.

The council is proposing a further informal consultation period, lasting six weeks, to begin next month.

JOB VACANCY: #Altrincham Grammar School for Girls has an opening for a Midday Assistant

JOB VACANCY: #Altrincham school Loreto Grammar has an opening for a Site and Maintenance Operative A woman had her Rolex watch stolen after being attacked by three masked men in her own home in Bowdon yesterday. The three men gained entry to the Win... Workers who lost their jobs when Altrincham-based The Cartwright Group placed two of its companies into administration earlier this week have begun th...

I love to bake, he loves to sing. Sibling harmony @russellthevoice @altrinchamtoday 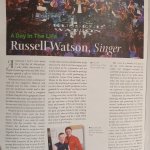 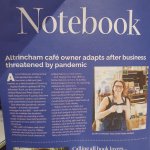 These incredible crane photos give a bird’s eye view of Altrincham – and views towards Manchester, the Peaks and Jodrell Bank